This is the first in a series we'll be running throughout 2017 looking back at historically significant prolife moments in our state's history. 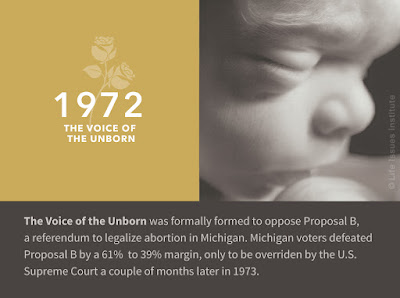 The effort to legalize abortion in America began in earnest in 1959, when the influential legal group ALI (the American Law Institute) recommended legalizing abortion in the first draft of their model penal code. ALI makes recommendations for clarifying various laws, but in this case they sought to change the law.

Colorado was the first state to legalize abortion in 1967. A similar effort in Michigan in 1967 was defeated, but several other states fell to concerted efforts by abortion advocates over the next few years.

The first prolife advocates in many states were caught flat-footed by these attacks against the humanity of unborn children. To oppose this momentum the prolife movement began in earnest to organize themselves. In Michigan Kalamazoo Right to Life became the first local group to organize in 1970. Other independent groups around Michigan began to organize as well.

The momentum in favor of abortion came to a screeching halt in 1971. Had the U.S. Supreme Court never waded into the issue of abortion, 1971 could likely have been the high water mark for abortion in the United States. Following successful defensive efforts in 1971, the prolife movement began moving to roll back legalized abortion in several states. They were aided by a shocked populace who didn't expect to see so many abortions, particularly in New York. There was a dawning appreciation that abortion was a Pandora's Box that ought not to have been opened.

New York legalized abortion-on-demand up to 24 weeks of pregnancy in 1970, but prolifers were successful in passing legislation to repeal the law through New York's state legislature by 1972. The only thing standing in their way was a veto from the hardened Republican New York Governor Nelson Rockefeller. Rockefeller was a high-profile politician who attempted several runs at the presidency and ultimately served as President Gerald Ford's vice president. The Rockefeller family has long been a driving force behind abortion and population control programs globally. Their family's Population Council organization is responsible for bringing the RU-486 abortion pill to the United States.

With the stunning reversal in New York abortion supporters needed some positive momentum. They next looked to Michigan as a large target to breathe new life into their movement. By 1972 several abortion legalization proposals had failed in the Michigan legislature. Abortion supporters decided they needed to take their case to the public through a ballot referendum. The only other public vote on abortion had been in Washington state in 1970, where they succeeded in legalizing abortion.

Proposal B of 1972 would have repealed Michigan's prolife law protecting the unborn to allow abortions during the first 20 weeks of pregnancy. The people voted on the ballot proposal on November 7, 1972, and it failed with 1,270,416 "yes" votes and 1,938,265 "no" votes. Instead of putting the abortion movement back on offense a super-majority of Michigan voters issued them a strong rebuke.

What made the difference? Local grassroots prolife volunteers.

Many groups that would later become affiliates of our state organization banded together under a common banner, the Voice of the Unborn. These local grassroots volunteers outworked a very nationally-minded abortion movement with a simple message about the value of all human life.

The thousands of individuals involved in the Voice of the Unborn didn't know that their victory was predestined for defeat as seven members of the U.S. Supreme Court were in the process of writing their decisions in Roe v. Wade in Doe v. Bolton. With the abortion movement flailing for help, unelected pro-abortion judges took it upon themselves to do what their allies could not through the democratic process.

The Voice of the Unborn's victory was not in vain, however. The Voice of the Unborn would eventually become Right to Life of Michigan and we have continued using the same locally-focused model to achieve victories to advance legal protections for unborn children. It's the same organizational model that will allow local volunteers from places most Americans have never heard of to overcome the many influential institutions with cushy metropolitan offices that continue to stand in the way of restoring legal protection to all innocent unborn children.

Visit our blog in July for our next notable prolife moment in Michigan history in 1979.

Honoring 50 years of prolife advocacy in Michigan
Posted by Right to Life of Michigan at 12:42 PM