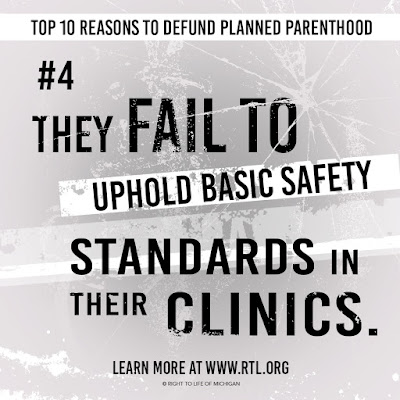 Independent abortion clinics justifiably have a reputation of being the worst of the worst when it comes to patient safety and care, but Planned Parenthood also has many of these problems which are an epidemic in the abortion industry. Because of abortion's unique political status, abortion clinics often skate with violations that would shutter fast food restaurants or dental clinics.

"He didn't wear gloves."
"They were using instruments on patients that were not sterile."
"It's not washed down, it's not even cleaned off. It has bloody drainage on it."

The faster abortions can be completed, the more income an abortion clinic can make.

The most recent woman to die following an abortion in Michigan had it performed at the Planned Parenthood facility in Kalamazoo. Cree Erwin, 24, had an abortion on June 30, 2016, and passed away at some point late in the evening of July 3, roughly 24 hours after visiting a nearby emergency room complaining of abdominal pain. Her mother found her unresponsive and "cold as ice," and emergency responders pronounced her dead at the scene in the early morning hours of July 4, Independence Day.

Planned Parenthood's slogan is: "Care. No Matter What." What sort of care did Erwin receive? What about her young son, left without a mother? Two lives have been taken, and Erwin's family is left to pick up the pieces. Just prior to Erwin's death, Planned Parenthood in Michigan announced that they were thinking about challenging Michigan's abortion clinic regulation in court as too restrictive. They've said nothing more since.

$2 million settlement in the death of Tonya Reeves

A recent example we have more details about is the death of Tonya Reeves, 24, from an abortion at a Planned Parenthood office in Chicago. She died of massive hemorrhaging following a second-trimester dismemberment abortion. She had multiple abortions throughout the day as Planned Parenthood and hospital staff struggled to deal with her condition. Her uterus had been perforated at Planned Parenthood, leading to an uncontrollable bleed and Reeves died during emergency surgery at the hospital. Following a lawsuit by Reeves' family, Planned Parenthood settled the case for $2 million to help Reeves' young son. No action was taken against the abortionist who caused Reeve's death, Mandy Gittler.

As far as we can tell, Mandy Gittler was the abortionist on staff in Kalamazoo the day Cree Erwin had her abortion.
Posted by Right to Life of Michigan at 12:15 PM