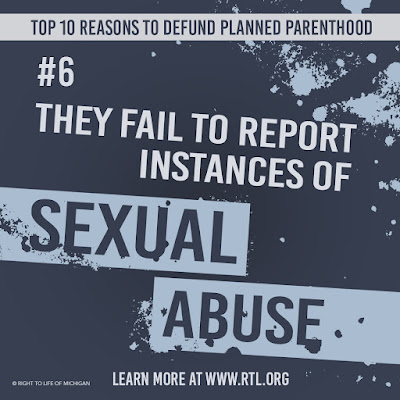 Planned Parenthood has essentially a "no questions asked policy" when it comes to abortion. Whether born of ideology or business convenience, that policy hurts women who are being coerced into having abortions, especially rape victims and women who are being sex-trafficked.

Planned Parenthood looks the other way

The prolife organization Live Action has done two undercover video investigations showing many cases of Planned Parenthood staff willing to ignore mandatory reporting laws regarding statutory rape, and help sex traffickers keep their women on the street. One case involved a staff member giving tips on how underage trafficking victims can get back to sex work immediately following an abortion. Another involved a staff member advising the undercover journalist to lie to a judge to cover up her age. The investigations resulted in multiple Planned Parenthood staff members being fired. Did you hear about these videos? Doesn't covering up multiple instances of rape at a taxpayer-funded institution have some consequences?

This isn't just about video stings, but real women who have been sacrificed

If you are a parent of a minor girl, Planned Parenthood believes you have no right to know if she has an abortion. In fact, they believe the U.S. Constitution requires parents to be kept in the dark (strange, we must have all slept through that part in civics class). In Michigan it's illegal for a tattoo shop to give a minor girl a tattoo without permission, but Planned Parenthood is OK with performing surgery on her without anyone knowing. Thankfully Michigan has a parental consent law, but we know that in the past abortion clinics in the state have directed girls to friendly or apathetic judges who rubber-stamp a judicial bypass to shut the parents out of the process. Parental consent laws exist not only as a matter of a parent's right to raise their child, but also to protect against the sexual abuse that Planned Parenthood staff have looked the other way on.
Posted by Right to Life of Michigan at 8:42 AM