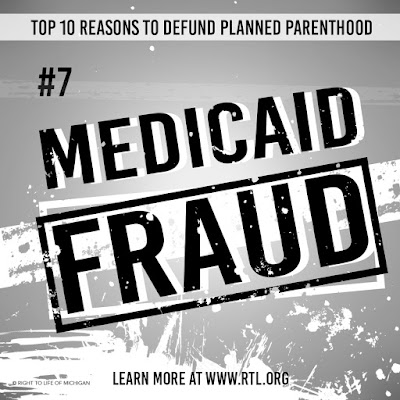 Planned Parenthood's main argument against defunding them is that they are just reimbursed by Medicaid for services provided. Forgetting for a moment their focus on abortion over real health services, Planned Parenthood has a terrible track record as a steward of your taxpayer dollars.

The Charlotte Lozier Institute and Alliance Defending Freedom released an excellent and detailed report on January 4 of Planned Parenthood's numerous problems with overbilling taxpayers through Medicaid. Audits and investigations have found Planned Parenthood affiliates to be the source of at least $12.8 million in waste and fraud. One federal audit found a Planned Parenthood affiliate was billing the federal government for abortion-related procedures. New York taxpayers are forced to directly pay for abortions through the state's portion of Medicaid, but federal law dictates that no federal Medicaid dollars must go to abortion. What was done about it? Not much! Time and again we've seen that pro-abortion officials rarely treat Planned Parenthood the same as other organizations or businesses.

Settling a case of Medicaid fraud in Texas

Let's briefly focus on one case in Texas, where public officials actually held Planned Parenthood accountable for once. A Planned Parenthood staff member blew the whistle on her employer, Planned Parenthood Gulf Coast. Allegations include falsifying medical records, billing for non-existent services, and providing unnecessary services. Planned Parenthood settled the case for $4.3 million. Texas has made efforts to kick Planned Parenthood out of their Medicaid program, but the pro-abortion Obama Administration attempted to exact revenge by holding other Medicaid patients hostage, leading to a long and convoluted fight still going on today.

How does this fraud work?