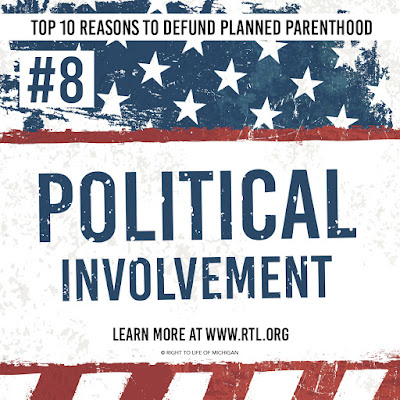 Involvement in the political process is very important. We firmly believe this as an organization. But what about organizations that receive half of their budgets from taxpayers? At what point are taxpayer dollars subsidizing electioneering and lobbying? Why should millions of taxpayers be forced to contribute to an organization that works directly to oppose their most deeply-held beliefs? When is the line crossed between participation and public corruption and influence peddling?

Planned Parenthood throws a lot of money around

According to their most recent annual report, in their 2014-2015 fiscal year Planned Parenthood spent $39.3 million on "public policy." In addition to that $39.3 million, Planned Parenthood also lists other activities in their annual report that sound related to politics. They spent $22.8 million on "engaging communities" and $23.7 million on "building advocacy capacity." We'd like to be able to explain what those categories mean exactly, and the taxpayers footing half of their bills deserve answers, but Planned Parenthood isn't forthcoming. They believe they are entitled to the billions of taxpayer dollars they receive and should be beyond questioning.

In the 2016 election cycle Planned Parenthood gave $3,042,948 to candidates and their affiliated political action committees spent $14,318,545, according to OpenSecrets.org. OpenSecrets ranks Planned Parenthood's candidate contributions in the top 1 percent of organizations, and their PAC spending ranks 23 out of 203. Not only is Planned Parenthood heavily involved in politics, they are one of the most major players. Taxpayers help them do this by paying for nearly half of their budget, freeing up their staff and resources to focus on opposing the views of many of those taxpayers.

An arm of the national Democratic Party?

As a non-partisan organization, Right to Life of Michigan laments that abortion has become a polarized party issue. That is a reality that Planned Parenthood faces as well, yet they seem to embrace it. For the second presidential election in a row, Planned Parenthood's CEO Cecile Richards addressed the Democratic National Convention in a speaking slot. Cecile Richards took a leave of absence in 2012 to work for President Barack Obama's re-election. Planned Parenthood broke with their convention to wade into the 2016 Democratic primary to endorse Hillary Clinton over an equally pro-abortion Senator Bernie Sanders, who was the victim of several questionable actions by the national Democratic Party apparatus. Why should taxpayers be forced to fund an essentially partisan organization?


Fighting the conscience of a majority of Americans

Polls routinely show a majority of Americans oppose tax-funded abortions, support laws requiring parental consent before abortions, support waiting periods, support laws that protect unborn victims of violence, oppose late-term abortions and vehemently oppose partial-birth abortions. On all of those issues Planned Parenthood has led the charge to oppose the views of a majority of Americans.
Posted by Right to Life of Michigan at 9:03 AM