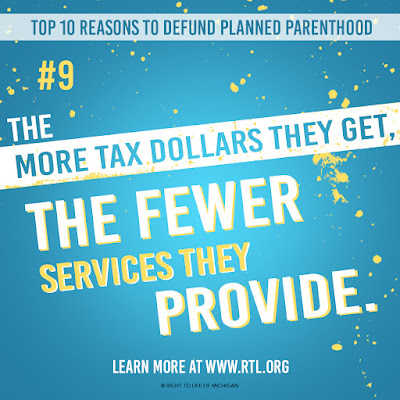 Planned Parenthood wants you to believe that defunding them will leave millions of women without vital care. In reality, they are a small section of the health care industry, and other community health centers could easily pick up their slack. Not only that, their own annual reports show that they don't actually increase services when receiving new taxpayer funding.

Would you call a clinic seeing one additional patient a day an impossible feat? Defunding Planned Parenthood won't completely end Planned Parenthood. They served the same amount of clients (2.5 million) back in 1999, with $360 million fewer taxpayer dollars. Let's assume they completely vanish, however. In 2014 there were 8,801 federally-funded health centers locations in America; those locations would have to serve Parenthood's 2.2 million non-abortion clients, using Planned Parenthood's $553 million in tax dollars. That's 250 clients per center, less than one more a day. That's $250 for each client to pay for an STD test, a pregnancy test or birth control. Those numbers are hardly overwhelming for centers that already serve more than 24 million people.

How does Planned Parenthood spend the money they do get?

When Planned Parenthood gets more tax dollars, it frees up money in their budget they've already committed to current expenses. In a budget, one dollar is as good as the next, so whatever extra money they get is practically going to whatever new services they are going to provide.

Think about it this way, if we offered to cover 100% of your grocery budget, now the money you were spending to feed yourself has been freed up. What will you do with it? Buy groceries that are twice as expensive? Eat twice as much? Probably not. The more likely scenario is that you'll use your old grocery money to buy that TV you've been eyeing in the store, or invest it, or give it away: whatever it is you value or prioritize the most.

What does today's Planned Parenthood truly value? Breast exams? Contraception? Serving more women? That's what they talk about all the time. Their growth and spending priorities show what it is they value the most, however, not their media spin. 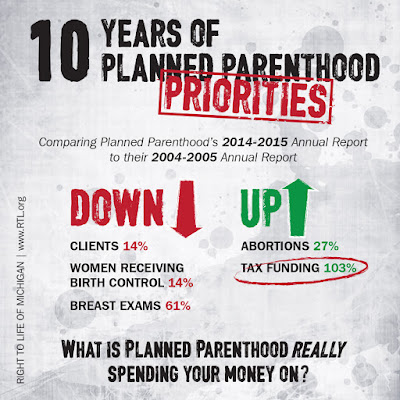 Posted by Right to Life of Michigan at 9:38 AM