Last week when being interviewed by Recode media, Planned Parenthood President Cecile Richards was asked about the impact social media has had on Planned Parenthood. She responded saying, "I think we were one of the original fake news targets."

She continued by adding, "there’s a lot of bad information out there and efforts should be made to promote sources and information that are actually good."

When asked to name an example of this "fake news" targeting, Richards declined, citing that she wanted to stay positive. Maybe this is because she knows that Planned Parenthood is really the one who relies on fake news as their public relations strategy. A good example is how they claim to provide mammograms when they really don't.

You have been often warned about trusting the validity of particular statistics and Planned Parenthood is the perfect example of why. Most recently in their annual report, Planned Parenthood was able to keep their claim that abortions are just 3 percent of the services they offer. What they didn’t tell you was that they created additional "services" like "Other STI Prevention and Treatments" or "Other Contraceptive Services" to cook the books and cover up their increasing abortion numbers.

We also must never forget the horribly gruesome undercover videos by the Center for Medical Progress. The most recent one featured an abortion doctor who was laughing about ripping out the eyes of unborn babies. We wish that was all fake news. Though Planned Parenthood has claimed time and again that these videos are "fake news," independent reviews of these videos have been done, there has been no evidence that has been found to discredit them. Even Planned Parenthood's phony self-review of the videos admitted they were genuine. Full footage of all of them is available online freely, but Planned Parenthood knows their supporters won't comb through hours of footage or transcripts like we have.

So who is the real fake news here? Planned Parenthood has repeatedly shown that they are willing to lie about the services they provide so that they can continue to take our tax dollars. They claiming time and time again that they are working for women, when in reality they are cutting clients and health services in favor of abortion promotion.

They frequently get away with this. When we post a story from a credited news agency about misdeeds in the abortion industry, we're the ones fighting off social media censors.

Fake news and finding accurate sources of information is a real problem we all face. We have to truly stand up for all women and teach everyone the truth using good information, and not let Planned Parenthood distract them from their agenda of abortion-on-demand through all nine months of pregnancy. 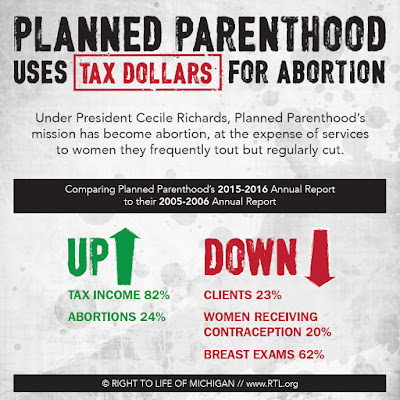 Posted by Right to Life of Michigan at 5:20 PM