This is the fourth entry in a monthly series we’ll be running throughout 2017 looking back at historically significant profile moments in our state’s history. 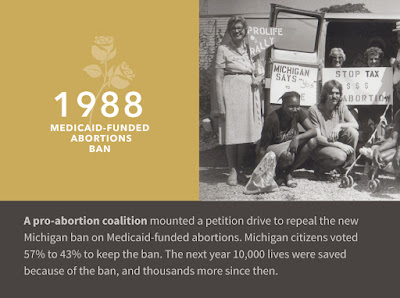 There's only so many times you can say "no." That's a lesson former Michigan Governor Jim Blanchard had to learn the hard way, though not without a tragic cost of human lives.

In 1977 the U.S. Supreme Court handed down decisions in Maher v. Roe and Beal v. Doe upholding state laws restricting Medicaid-funded abortions. With this new avenue open, Right to Life of Michigan began pushing to end tax-funded abortions in Michigan. It took nearly a decade for us to succeed.

Two large roadblocks were pro-abortion Michigan governors Bill Milliken and Jim Blanchard. They issued a combined 17 vetoes of legislation to end tax-funded abortions. Thankfully the Michigan Constitution has a way for the people to override a governor's veto using citizen-initiated legislation. Citizens can collect enough petition signatures to initiate veto-proof legislation in the Legislature.

In February 1987, Right to Life of Michigan launched the petition drive to end tax-funded abortions. Approximately 192,000 signatures needed to be collected within 180 days in order to initiate the legislation. Our grassroots collected about 460,000 signatures in 83 days. Both the Michigan House and Senate approved the law in June 1987 (Public Act 59), cutting Governor Jim Blanchard out of the picture entirely.

Michigan's law does come with a caveat. Opponents of citizen-initiated legislation can collect their own signatures and force a public vote over the new law. Abortion supports in Michigan collected about 220,000 signatures, putting our new ban on Medicaid-funded abortions on the ballot in 1988. On November 8, 1988, the people of Michigan voted 57% to 43% to retain the ban. The margin of victory was enough to send a loud message to abortion supporters than Michiganders would not tolerate being forced to pay for elective abortions.

The effects of the law are simply awe-inspiring. In 1988 there were 46,747 reported abortions in Michigan. In 1989, with the Medicaid abortion funding ban in place, reported abortions dropped to 36,557. That's more than 10,000 lives saved in a single year! The ban has been in place for more than 28 years now. How many more lives have been saved since then? As many as 280,000? More? The human cost of abortion is so high that simple things like respecting the conscience rights of citizens can also save lives on a gargantuan scale.

Michigan grassroots prolifers should be confident that their actions have saved lives and continue to save lives on a daily basis. If we had given up 50 years ago, then hundreds of thousands of our family members, friends and neighbors would not be with us today. Those missing people would have been killed at taxpayer expense, and nearly all of them are blissfully unaware that Michigan prolifers are the reason they are alive today.

How many more people would be alive today had governors Milliken and Blanchard not stood in the way of the Medicaid-funded abortion ban for nearly a decade? 100,000? That should be a humbling reminder that elections have extremely dire consequences.

In 1989 our ban was challenged in court. Abortion supporters know they can often rely on biased judges to overturn the will of voters. In 1991 a three-judge panel of the Michigan Court of Appeals voted 2-1 to block the ban as unconstitutional. The two judges invented a right to tax-funded abortions in the Michigan Constitution, something even the pro-abortion majority on the U.S. Supreme Court wasn't willing to invent in the U.S. Constitution. The court challenge was ended by the Michigan Supreme Court in 1992 by a 5-2 vote, ensuring the law, the voters, and the lives of hundreds of thousands of Michiganders prevailed over the personal whims of two abortion supporters wearing black robes.

Visit our blog in October for our next notable moment in Michigan history in 1990, when Governor Jim Blanchard learned his lesson.

Honoring 50 years of prolife advocacy in Michigan
1972: The Voice of the Unborn
1979: Michigan Citizens for Life
1981: First Media Campaign
Posted by Right to Life of Michigan at 3:16 PM