Every year Gallup does polling on the issue of abortion. They are one of the better polling outfits, because they will ask more specific questions than most others.

For the first time since 2012, Gallup asked respondents if abortion should be legal or illegal in each trimester. The results show a massive majority of adults oppose Roe v. Wade.

There's one big caveat, sadly: a massive majority of adults have no clue about what Roe v. Wade does. That includes Gallup itself, an otherwise credible organization! 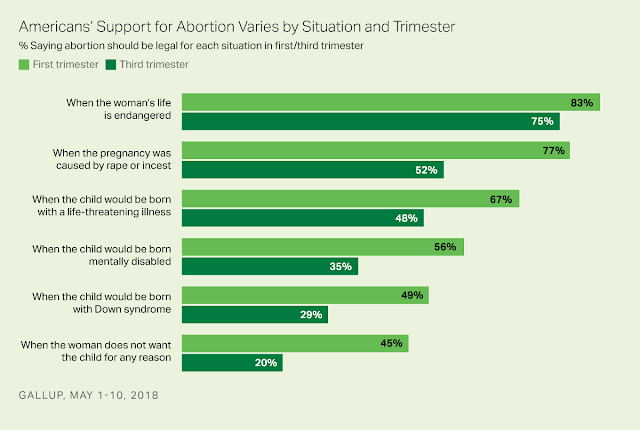 In their analysis of their poll, Gallup gets it utterly wrong: "The wording of Roe v. Wade aligns almost perfectly with where Americans stand on late-term abortions—keep them legal to save the life of the mother and in cases of rape and incest, but not for other reasons."

What did Roe v. Wade and Doe v. Bolton do? Those two Supreme Court cases legalized abortion through all nine months of pregnancy, for any reason. If you find an abortionist who will do one, and will say it's for a "health" reason, no legal authority or court in America can stop it.

While Gallup does admit many Americans depart from Roe v. Wade about 1st trimester abortions, the above quote gets it wrong, both on what Roe v. Wade and Doe v. Bolton did legally, but also when you consider the reasons women have abortions.

Let's break down their poll further based on the reasons women have abortions, according to the pro-abortion Guttmacher Institute. Here's the percentage of abortions performed for each of these reasons:

Women's Life in Danger: 4% - Michigan law has never made it illegal to end a pregnancy in the rare case where it's a choice between mother or child (both have an equal right to life). In the Guttmacher study, the response is, "physical problems with my health." That could range from concerns of age or past c-sections to true threats against a mother's life. So, the 4% number is extremely generous.

Child with life-threatening illness/disabled/Down syndrome: 3% - The Guttmacher study response is, "physical problems affecting the health of the fetus." This could range from true life-threatening conditions, to Down syndrome, to a cleft palate easily correctable by surgery.

Woman doesn't want child for any reason: more than 92%

So, even an extremely generous reading of reasons shows more than 92% of abortions are simply because the woman doesn't want the child. In the Gallup Poll, only 45% of U.S. adults believe first trimester abortions should be legal for social reasons.

Even though the Gallup poll found 60% of Americans saying abortion should be generally legal in the 1st trimester, 55% of Americans would ban more than 92% of abortions if given the opportunity.

Planned Parenthood opposes laws that ban abortions on children diagnosed with Down syndrome, even though a minority of Americans believe they should be legal. Planned Parenthood often uses children with disabilities to justify keeping third-trimester abortions legal for any reason. They say these disabilities aren't diagnosed until later in pregnancy, and somehow that means a woman should be able to get an abortion for any reason up to the moment of birth. Only 29% of Americans think abortion should be legal for Down syndrome in the third trimester.

While the abortion industry is happy to lie in media stories about the reasons women have late-term abortions, most are for purely elective reasons according to their own published research.

So, why do these 29% get to prevail over 71% of Americans? Why does their small minority mean children with Down syndrome at 39 weeks of pregnancy can be legally killed? Roe v. Wade and Doe v. Bolton.

As many as 87% of Americans oppose the practical outcome of Roe v. Wade! Only 13% support legal abortions in the 3rd trimester. How can Gallup claim Roe v. Wade aligns almost perfectly with American's views on abortion? Well, even Gallup doesn't understand Roe v. Wade. Have they heard of Doe v. Bolton?

If two-thirds is a super-majority, a massive majority of Americans oppose Roe v. Wade. It's time for educators and journalists to stop running interference for the abortion industry and confusing even their own colleagues about the status of abortion law in America.
Posted by Right to Life of Michigan at 2:34 PM