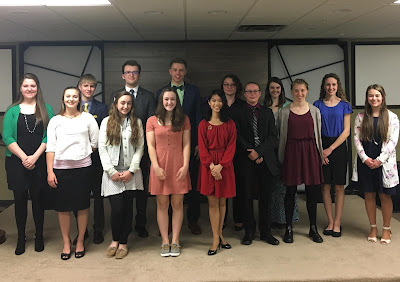 The 30th annual Right to Life of Michigan Educational Fund High School Oratory Contest was held on Saturday, April 27th, in Holt, Michigan. There were 15 finalists who gave powerful speeches in defense of life.

The High School Oratory Contest features students giving a 5-to-7-minute speech on one of several prolife topics. Right to Life of Michigan affiliates sponsor local contests, and the local winners compete in the state contest.

From Calvin’s speech: “The legalization of euthanasia will lead us down a terribly dangerous slippery slope. It will call into question the morality of killing another human being. If we deem the act of killing to be acceptable, in certain circumstances, than who or what will determine what those acceptable circumstances are? There will be no set rules to stop us from falling further down this path. Simply put, the acceptance of Euthanasia will lead to a degradation of the value of human life. It will lead to the devaluation of those who seem lesser than you. If we believe that it is okay to kill people who are terminally ill, which may seem acceptable to some, than what will stop us from believing it is okay to kill other people? People who have mental disabilities? People who are cripples? People who are born with birth defects like autism and down syndrome? All of these people, human beings, what will become of them? To question whether people with physical ailments still have the same rights as another human being is to question what even makes a human life valuable. A human life has intrinsic value from the point of conception to natural death. Nothing, not age, health, gender, race, religion, will ever change that.”

From Noel’s speech: “Many Pro-choice advocates would be reluctant to admit that the purpose of the child’s life has the right to “interfere” with the purpose of the mother’s life. “What about women’s rights?” They argue. “The mother should have the right to choose.” Historically speaking, feminists were strongly pro-life… That the current feminist movement advocates for abortion is absurd. According to Randy Alcorn, author of Why Pro-Life? Abortion has become the primary means of eliminating unwanted females around the globe. Sex-selection abortion is a major contributing factor to the unequal ratio of males to females throughout the world. Equal rights for women will never be achieved until unborn females are given the most basic rights—the right to life!”

From Emma’s speech: “My unknown parents in their heroic act also stood—lovingly, for my life, likely under more tragic circumstances than I could ever imagine. Their stand under harsh repression granted me a stand in freedom, albeit in a country that fails to uphold the primary inalienable right endowed by our Creator. As I take my stand, praying outside the local abortion clinic for a few hours every month, I honor the life-affirming choice my Chinese parents made. I plead not only for the repentance of my adopted homeland, but also for the little ones who deserve to be cradled in loving arms. Loving arms which reflect the love of my heavenly Father who will never leave me or forsake me.”

Posted by Right to Life of Michigan at 4:42 PM