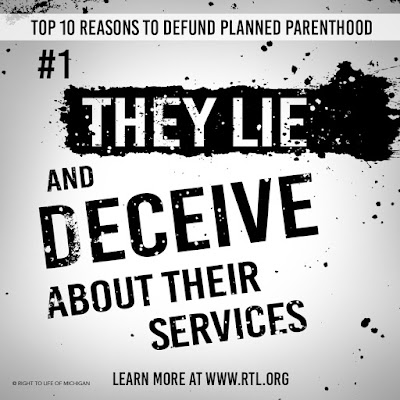 Planned Parenthood carefully crafts a public image of doing everything they can to help low-income women with health problems. This public image is created through deception and even outright lies.

Only 3 percent of Planned Parenthood's services are abortion?

If that were true, why wouldn't Planned Parenthood drop abortion services and focus on the other uncontroversial things they claim are the most important to them? Because they deceive people on how they count "services." If a woman comes to Planned Parenthood to have an abortion, the pregnancy test beforehand and the contraception they give her when leaving all count as services. She came for an abortion, but she was given three "services." Would an oil change shop claim their main services are filling tires and replacing air filters? Here's a short video that breaks this all down.

According to their most recent annual report, if you divide the number of clients they serve (2.5 million) by the number of abortions they do (323,999), 13 percent of their services include abortion. That's a large amount of abortions. Planned Parenthood performs more abortions in a year than the number of women who die every year of cancer in America (about 270,000).

What what will women do if Planned Parenthood is defunded?

Defunding Planned Parenthood doesn't actually cut any federal funding for health services, it just means centers that offer more comprehensive services that don't include abortions will be instead getting the money. Planned Parenthood does not offer emergency health services, and women will still have thousands of alternatives that provide more services: Posted by Right to Life of Michigan at 10:52 AM