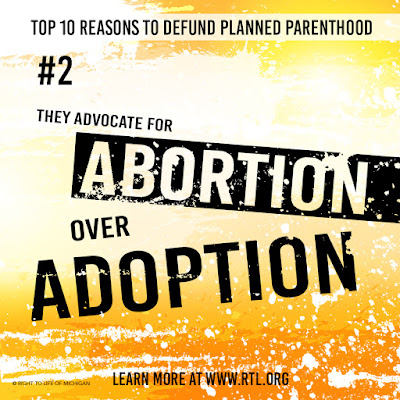 Planned Parenthood claims abortion is just a little part of what they do, but when you look at their own numbers you can clearly see a pattern that always points back to abortion.

Planned Parenthood does not present "all the options"

In 1997 Planned Parenthood performed 165,174 abortions, according to their own annual report. That same year they made 9,381 adoption referrals. By 2014, their abortions have increased 96 percent, and their adoption referrals have decreased by 78 percent. In 2010, Planned Parenthood issued a rule requiring all of their affiliates to operate an abortion clinic or face disaffiliation. Their own numbers from the last 10 years show that when they receive more tax funding they cut other health services in favor of abortion.

It's important to remember Planned Parenthood's history here. A pamphlet they produced in 1952 said abortion "kills the life of the baby after it has begun." Even their founder, Margaret Sanger, was extremely skeptical of abortion despite her other repugnant beliefs regarding eugenics, coercive population control and the genetic "stock" of the poor. In her 1920 book "Woman and the New Race," Sanger wrote, "While there are cases where even the law recognizes an abortion as justifiable if recommended by a physician, I assert that the hundreds of thousands of abortions performed in America each year are a disgrace to civilization." What went so horribly wrong?

Abortion is a money maker, adoption is not