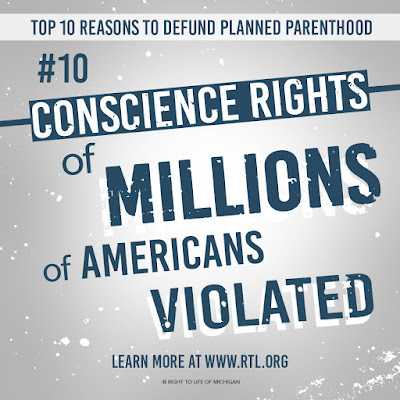 Prolife people object to abortion. Abortion takes the life of innocent children; what else could be more objectionable than taking lives? Many abortion supporters don't truly understand this, often because Planned Parenthood and other pro-abortion organizations will mislead their own supporters about what motivates prolife people. They say we hate women (even though we're mostly led by women). They say we hate poor people. Sometimes we'll get at least some credit for not being monsters when we are accused of only caring about babies before they are born.

The scale of life taken by abortion is almost beyond compare. Since 1973, more than 57 million unborn children have had their lives taken from them. Prolife people strive every day to end this devastation, and we refuse to simply sit down and be forced to support the organization that leads the abortion movement.

Planned Parenthood performs more than 320,000 abortions a year. That is a scale we can understand and compare things to, to understand why prolife people object to being forced to support their organization:


To begin to wrap your mind around the greater cost of abortion, listen to this short video that uses a tin can and BBs to put the conscience of prolife people into perspective:

Posted by Right to Life of Michigan at 9:26 AM