This is the sixth entry in a monthly series we’ll be running throughout 2017 looking back at historically significant profile moments in our state’s history. 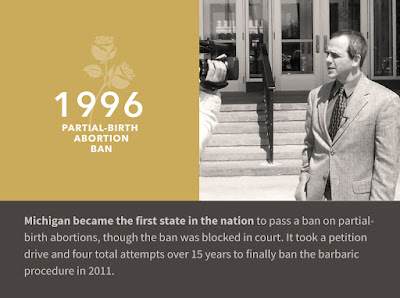 Michigan's Partial-Birth Abortion Ban Act of 2011 had a long road to eventual victory. Along the way however, the ban illustrated the tenacity of the prolife movement.

This story began in 1992. Abortionist Martin Haskell gave a presentation that year at a National Abortion Federation seminar detailing a new abortion procedure dubbed "dilation and extraction," or, "D&X." The woman's cervix is dilated and the abortionist grasps the baby with forceps. The abortionist delivers the child, until only the head remains behind the cervix. The abortionist grabs the child's shoulders and prepares to take the child's life. Haskell's paper describes the brutality:

"While maintaining this tension, lifting the cervix and applying traction to the shoulders with the fingers of the left hand, the surgeon takes a pair of blunt curved Metzenbaum scissors in the right hand. He carefully advances the tip, curved down, along the spine and under his middle finger until he feels it contact the base of the skull under the tip of his middle finger. Reassessing proper placement of the closed scissors tip and safe elevation of the cervix, the surgeon then forces the scissors into the base of the skull or into the foramen magnum. Having safely entered the skull, he spreads the scissors to enlarge the opening. The surgeon removes the scissors and introduces a suction catheter into this hole and evacuates the skull contents. With the catheter still in place, he applies traction to the fetus, removing it completely from the patient."

The prolife movement got their hands on Haskell's paper in 1993, and quickly went to work publicizing it. Congress moved to ban the procedure in 1995. The U.S. House acted first with an overwhelming vote of 288-139, and the Senate followed suit with a vote of 54-44. Sadly, President Bill Clinton was completely devoted to abortion, and vetoed the bill on April 10, 1996. The U.S. House had the two-thirds bipartisan vote necessary to override Clinton's veto, but the U.S. Senate came up short.

Following failure at the national level, Michigan prolifers moved quickly. State Rep. James Ryan introduced a ban using the same language as the federal bill on May 21, 1996. On June 6, the Michigan House voted 63-36 and the Senate voted 28-8 for the ban. Governor John Engler signed it into law on June 14, 1996. Michigan led the way as the first state in the nation to ban the procedure. The ban was challenged in federal court, however, and lost.

Congress made another attempt to ban the procedure in 1997, but once again Bill Clinton vetoed the bill. Michigan went back to the drawing board, this time using a unique approach. Michigan passed the Infant Protection Act in 1999, declaring that a partially-born child has legal protection as a person. A federal judge blocked the law, following the U.S. Supreme Court decision in Stenberg v. Carhart in 2000, which struck down Nebraska's partial-birth abortion ban. Michigan's new attorney general, Jennifer Granholm, refused to appeal the case.

Prolifers were undaunted. On the federal level, with the election of President George W. Bush, a new effort to ban the procedure was successful. President Bush signed the Partial Birth Abortion Ban Act into law on November 5, 2003. The law was quickly taken to court. Meanwhile, Right to Life of Michigan made a third attempt to ban the procedure in 2003, once again using a novel approach. Our Legal Birth Definition Act declared birth to be at the point where any portion of the child is vaginally delivered outside the mother's body. The bill passed the Michigan Legislature, but was vetoed by Jennifer Granholm, now advocating for abortion from the governor's mansion.

Prolifers persevered. Using Michigan's unique constitutional procedure for citizen-initiated legislation, Right to Life of Michigan kicked off "The People's Override," cutting Granholm out of the process to enact the Legal Birth Definition Act. An army of RLM volunteers collected 460,034 signatures in just three months, almost double the signatures required and setting state records for the most signatures collected with all-volunteer circulators and the highest signature validity. The ban was initiated into the Michigan Legislature, the House and Senate passed it again, and the bill became law in 2004 without Granholm. Once again, a federal judge overruled the law, and an appeal to the U.S. Sixth Circuit Court failed in June 2007.

We were not content with the victory, however. Federal laws require federal enforcement, and a pro-abortion president with pro-abortion prosecutors and officials would likely ignore the law or refuse to enforce it. Personnel is policy, especially on the issue of abortion.

What were the end results of this lengthy process?

Public opinion on abortion underwent a big reversal. For the first time many Americans saw on TV or read in a newspaper just how brutal abortion is, and that late-term abortions are not an urban myth. A majority were shocked such brutality was perfectly legal. It's unlikely abortionist Martin Haskell knew his paper at an obscure abortion convention could change the face of the abortion debate against him.

The Supreme Court's 2007 decision in Gonzales v. Carhart was important. It marks the first time the Supreme Court upheld an abortion ban, creating a large crack in Roe v. Wade's foundation. It has set the stage for additional efforts to challenge equally barbaric dismemberment abortions.

It also proved to the wider world that prolifers are not going to surrender. There was speculation at the time that the U.S. Supreme Court's 1992 decision upholding legalized abortion in Planned Parenthood v. Casey might spell the end of efforts to protect unborn children. The decision itself "calls the contending sides of a national controversy to end their national division by accepting a common mandate rooted in the Constitution." Instead we've seen a revitalization of prolife efforts and advances, especially on the state level.

Visit our blog in December for our final post honoring 50 years of prolife advocacy, our effort in 1998 to defeat Dr. Death.

Honoring 50 years of prolife advocacy in Michigan
1972: The Voice of the Unborn
1979: Michigan Citizens for Life
1981: First Media Campaign
1988: Medicaid-Funded Abortions Ban
1990:  Prolife Governor
Posted by Right to Life of Michigan at 4:41 PM