Gretchen Whitmer, candidate for Michigan governor, talks about women's health and protecting women. What is her actual record on that?

No, we're not talking about her failure to prosecute serial rapist Larry Nassar. We are talking about similar situations, however, where the government officials charged with protecting people fail in their duties.

We've documented years and years of abuses within the abortion industry that put women's health at risk, everything from medieval clinic conditions to abortionists with criminal histories of violence and drug abuse.

Even with these regulations in place, there are still abortionists operating in Michigan who you wouldn't trust to operate on your cat. In 2016, a young mother named Cree Erwin died following a botched abortion at the Planned Parenthood facility in Kalamazoo. To this date, the abortionist and the Planned Parenthood facility responsible for her death has not been held accountable. Preventing and prosecuting abuses in the abortion industry is an ongoing, difficult struggle, mostly because of apathetic or rabidly pro-abortion officials who look the other way.

Will Gretchen Whitmer stand up to protect these women? No. She voted against the Prolife Omnibus Act, and would prefer it if the abortion industry were free to regulate itself. These are just simple, common-sense health and safety regulations that other outpatient facilities routinely follow. 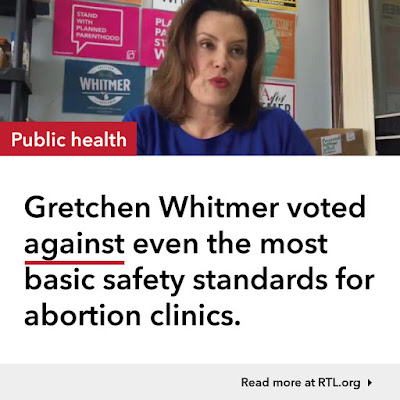 Posted by Right to Life of Michigan at 10:44 AM

For the longest time, prolife sidewalk counselors have seen tragic situations where women are essentially dragged into abortion clinics against their will, whether it's a parent, the father, or someone else in their life. Much research backs up what prolife people have seen at Michigan abortion clinics and a large number of personal testimonies from around the country.

The abortion industry holds itself out as being "pro-choice," but in reality it profits from coercive abortions and hasn't addressed this glaring problem.

We wanted to address this problem by making coercion to abort a specific crime, to hold people accountable who force women to take the life of their own child. In 2012, the Michigan Senate voted overwhelmingly in favor of two bills to make coercive abortions a crime. The votes on House Bills 4798 and 4799 where 29-8 and 29-9 in favor of the bill. These bills eventually became law.

Gretchen Whitmer voted "no" on both bills. Confronted with the issue of women being coerced into abortions against their will, Whitmer decided they didn't need additional legal protection.

Whitmer talks about "reproductive rights," "health" and "choice," but she actually means abortion. Women who are forced into having abortions deserve legal protection, not to have their stories ignored. They certainly don't deserve to be treated as collateral damage by those bent on protecting abortion-on-demand through all nine months of pregnancy at any cost. 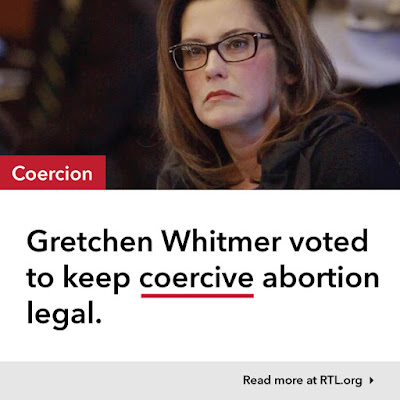 Posted by Right to Life of Michigan at 9:35 AM

There's a lot of adjectives you should use to describe partial-birth abortion: brutal, barbaric, medieval, inhumane.

Pro-abortion Supreme Court Justice Anthony Kennedy cast the deciding vote in the 2007 U.S. Supreme Court decision Gonzales v. Carhart to uphold a ban on the procedure, also called an "intact dilation and extraction" in the euphemistic language of abortionists. In his decision, Justice Kennedy wrote, "No one would dispute that, for many, D and E is a procedure itself laden with the power to devalue human life."

Gretchen Whitmer has repeatedly voted against efforts to ban partial-birth abortions in Michigan. In 2008, she voted against a ban in the Michigan Senate, stating that, "This is a bill that is emotional, that is often argued on the basis of emotions and not always from facts."

Well, let's talk about facts. This is how a partial-birth abortion works. The woman is dilated over the course of three days. On the third day, the intact child is "extracted" via a breach birth. Before the birth process is completed, the abortionist grabs the shoulders of the child before her head is out of the birth canal. The abortionist takes a sharp instrument, and stabs the baby in the back of the head. The abortionist then uses a suction catheter to suck out the brain of the child, killing her, just mere inches before her life is considered valued and protected.

Anyone who supports that should be disqualified from holding office as a matter of basic humanity.

Gretchen Whitmer will try emotional appeals to get you to ignore the facts about this gruesome procedure, claiming it's for saving women's lives. First of all, why use a three-day-long procedure in an emergency? Second, why not just allow the baby to be born? Third, let's examine the facts. One of the pioneers of the procedure, abortionist Martin Haskell, said about 20 percent of the partial-birth abortions he performed were because the child had a disability, and 80 percent where for social or economic reasons.

Gretchen Whitmer's abortion fanaticism leads her to defend stabbing viable babies in the head during the process of birth rather than simply allowing them to be born.

If elected, Gretchen Whitmer will take the first opportunity she has to expand abortion, including making partial-birth abortions legal once again. 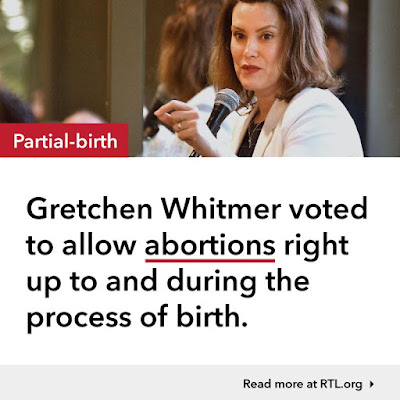 Posted by Right to Life of Michigan at 2:06 PM 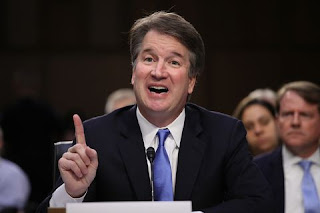 "Republicans divided over abortion," the headline reads. The Hill teamed up with a sister company of the Harris Poll for a survey on the topic of abortion.

Well, they are less divided than Democrats, even though the article said Democrats are merely "somewhat divided."

How can the article so blatantly contradict the data? The authors are pulling a bait and switch using Roe v. Wade, with it being the hot topic as Judge Brett Kavanaugh inches closer to a seat on the U.S. Supreme Court.

The only category in the poll that lines up with Roe v. Wade is those who want abortion legal at any point for any reason, an opinion shared by only 9% of Republicans and 25% of Democrats.

Because of dishonest media narratives and downright legal and historical ignorance, a lot of people believe abortions are only legal before viability/third trimester because of Roe v. Wade. Using that metric, only 29% of Republicans and 56% of Democrats agree with Roe v. Wade. When you include everyone together, only 45% of Americans believe abortion should be legal in the first or second trimester.

That ought to be the headline, right there: "55% of Americans Would Ban Most Abortions."

Sadly, many Americans don't see clearly about the issue of abortion and rape yet, but those exceptions—along with the life of the mother—count for a tiny amount of abortions. Fewer than 1 percent of abortions are because the woman is pregnant from sexual assault. Well more than 90% of abortions are for purely social and economic reasons.

Through dishonesty or ignorance, the journalists reporting on this poll are deceiving Americans about what Roe v. Wade and Doe v. Bolton did. Even 44% of Democrats believe abortion should be entirely illegal or would ban more than 90% of abortions.

Who again is more divided?

Prolife people should be encouraged, because a majority of Americans are on their side about Roe v. Wade, and the abortion industry can only hold on to the status quo by straight-up deceiving people. They know being honest about abortion is a losing proposition for them.

Here's some other groups in the poll who would ban more than 90% of abortions:

The only demographic groups in the poll with a majority believing abortion should be generally legal in the 1st and 2nd trimester are:

In other words, old college professors are abortion's key demographic, not young women.
Posted by Right to Life of Michigan at 2:58 PM

Patients have a right to see their own medical records. That principle should be simple enough. Sadly, when it comes to abortion, principles and rights can suddenly no longer count.

Even the very pro-abortion Governor Jennifer Granholm signed the ultrasound bill into law. There should be nothing controversial about allowing people to see the results of tests or scans. The only reason an abortionist has to hide the information is to ensure the woman stays in the dark, and Gretchen Whitmer is OK with that. 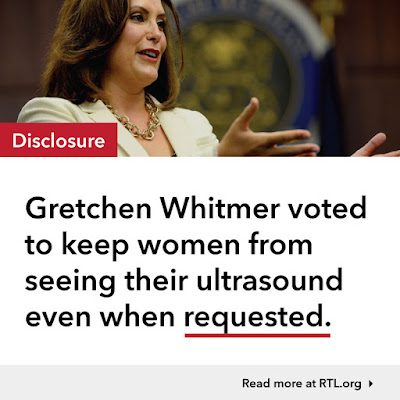 Posted by Right to Life of Michigan at 9:03 AM