In an effort to oppose Michigan’s recently passed legislation opting the state out of abortion insurance coverage, Planned Parenthood Advocates of Michigan have created a web site entitled “Enough is Enough!”

The web site has a variety of talking points against the legislation, information about contacting legislators, a place to sign up to get involved and a section where women from Michigan can supposedly share their stories.

The “Stories” section presently includes four written stories along with videos of legislators testifying against the opt-out legislation. 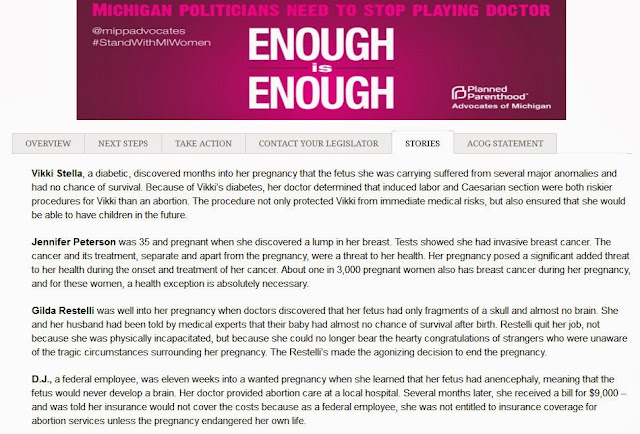 Since the stories are copied and pasted nearly word for word and no citation is given, it is notably that in two of the stories Planned Parenthood Advocates of Michigan decided to make some edits.  They specifically edited out how far along the women were in their pregnancies.

NARAL's web site says that Vikki Stella was in her 32nd week pregnancy when she discovered her child's had fetal abnormalities.  Planned Parenthood changes this to say Stella was “months into her pregnancy.”  A New York Times article from November 8, 1995, mentions that Stella had her abortion at 36 weeks.

NARAL’s web site also notes that “Gilda Restelli was nearly 30 weeks pregnant” while Planned Parenthood changes this to say Restelli was “well into her pregnancy.”

In their desperate attempts to attack this prolife legislation, abortion advocates have made false statements about whether the treatment of miscarriages would be covered and how the signatures which initiated this legislation were collected.

As they try to drum up sympathetic stories, they are now plagiarizing the work of another pro-abortion organization and deceptively editing those stories because they recognize most people are not in favor of their tax dollars and insurance premiums paying for 3rd trimester abortions.
Posted by Right to Life of Michigan at 4:01 PM