#3 reason to defund Planned Parenthood: they deny the effects of abortion 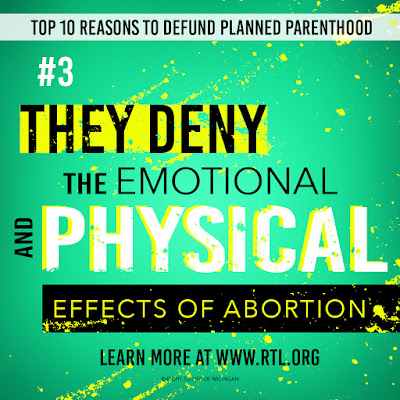 Planned Parenthood has a financial interest in abortion. They have an incentive to routinely deny that abortion has any effects on women’s health, be it physical, emotional, or otherwise.

There are countless women who have expressed turmoil from past abortions. Rather than accept these women’s stories, in a publication titled, "The emotional effects of induced abortion," Planned Parenthood begins it by flatly stating that, "For more than 30 years, substantive research studies have shown that legally induced abortion does not pose mental health problems for women." Are women who express their depression and anguish after abortion not experiencing mental health problems?

Many studies have shown that abortion is related to an increased risk for several mental health problems: mood disorders, anxiety, substance abuse, suicidal thoughts, etc. Abortion is associated with an increased risk of mental problems in 13 of 36 studies between 1995-2011. No difference between abortion and childbirth is found in five of the studies, and only one found worse outcomes for giving birth. To Planned Parenthood, the only "substantive" studies and experiences are those that validate their commitment to abortion.

Their publication entitled, “Myths about abortion and breast cancer,” is pretty clear on their position. The majority of worldwide studies done on the issue have shown a correlation between abortion and breast cancer. Planned Parenthood’s primary evidence refuting these numerous studies is a 2003 workshop hosted by the National Cancer Institute that declared there is no risk. One of the workshop's organizers, Dr. Louise Brinton, later went on to co-author a study listing abortion as one of several "known and suspected breast cancer risk factors." The study shows abortion is associated with an increased risk of breast cancer. Let's compare abortion to alcohol consumption, which is a widely accepted risk factor. The breast cancer odds ratio for women who have abortions compared to those who don’t in Brinton’s study was 1.4. It was only 1.1 for women who have three or more drinks a week compared to those who had none (1.0 meaning no change in risk). Women deserve to be informed that dozens of studies have shown a link between abortion and breast cancer, not a flat denial from researchers who publish data that contradict their own conclusions.