This is the final in a five-part series contrasting the ways our society could handle end-of-life care moving forward.

What is a doctor? What role do they occupy in society?

While these questions may seem clear, in recent decades the fundamental role of physicians has become increasingly unclear. As advocates for doctor-prescribed suicide continue to try to convince states to change their laws, two paths forward present themselves.

The first path affirms the traditional role of doctors as healers. Though technology changes, bringing new opportunities for treatment and new challenges to face, the basic ethics of the doctor-patient relationship have remained unchanged for millennia. The value of, "first, do no harm," is a core part of the Hippocratic Oath: "I will follow that system of regimen which, according to my ability and judgment, I consider for the benefit of my patients, and abstain from whatever is deleterious and mischievous."

The second path is one that hasn't been traveled much, and when it has, the worst forms of abuses have emerged. If we embrace doctor-prescribed suicide and euthanasia, we give doctors the power over life and death itself. We would reject the essence of medical ethics as expressed by the Hippocratic Oath, and give doctors the power to kill.

Is "mercy killing" compatible with the role of physicians?

Doctors can't heal everything. For everyone an inevitable time will come when medical intervention can no longer work. Certainly we can all agree the role of healer at that point changes from curing to comfort.

There are other times when medical intervention may work to stave off death, but the person believes their time is at an end, or the tolls of healing may be too high. If the patient decides to let death take its natural course, we can agree the role of healer shifts away from curing to comfort.

But for those weary of life, offering them lethal doses of drugs or giving them lethal injections completely shifts the role of doctors. We can see evidence of it in countries that have embraced euthanasia fully. Power corrupts, and the power to help end a life prematurely or to take it quickly results in doctors sacrificing part of their healing role.

By embracing mercy killing, the doctor-patient relationship changes. Can patients trust that their doctor's medical advice is in their best interest, especially if situations of "involuntary euthanasia" become widespread and ignored by the public, as they are in Belgium and the Netherlands? Will patients be getting the best effort from their doctors, when death remains the cheapest and easiest solution for any health issue?

What's the merciful thing for doctors to do for suicidal patients? Those patients deserve proper care, not lethal drugs. If the doctor can't provide healing themselves through their relationship with a patient, they should refer patients caught in the grip of despair to those who can try healing through counseling and mental health.

Most doctors remain firmly committed to their role as healers. How long until they are forced from their practice because the law forces them to accept mercy killing as part of their role? Canadian courts mandated doctor-prescribed suicide, and the slippery slope manifested abruptly with efforts to force every doctor there to be complicit.

Though the Hippocratic Oath has been forgotten by many, many doctors' associations still recognize the grave danger of compromising the role of doctors as healers. Doctors themselves worry about being placed is situations. In their Code of Medical Ethics, the American Medical Association says, "Physician-assisted suicide is fundamentally incompatible with the physician’s role as healer, would be difficult or impossible to control, and would pose serious societal risks. Instead of engaging in assisted suicide, physicians must aggressively respond to the needs of patients at the end of life."

The hands of healing and mercy cannot be the same hands that engage in death. Patients deserve doctors who will make it their mission to first, do no harm. 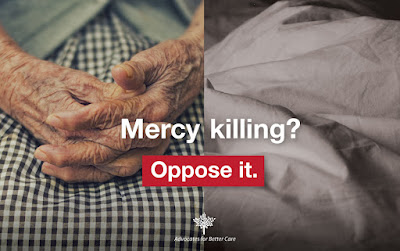 Posted by Right to Life of Michigan at 10:22 AM