Does Destroying the Unborn Make Us Richer? 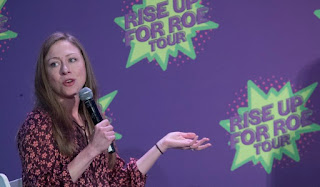 At a pro-Roe v. Wade rally, Chelsea Clinton made the following claim: "It is not a disconnected fact—to address this t-shirt of 1973—that American women entering the labor force from 1973 to 2009 added three and a half trillion dollars to our economy. Right? The net, new entrance of women—that is not disconnected from the fact that Roe became the law of the land in January of 1973."

So, does abortion make us richer? No, in fact, it does the opposite.

Chelsea Clinton may have a doctorate from Oxford, but she fails to grasp basic economics with her claim.

Before we discuss that, however, we should examine the moral claim here: taking the life of unborn children is good because it makes us more prosperous. How is that any different than ancient cultures engaging in human sacrifice to appease the gods for a better harvest? Or, more recently, chattel slavery: we dehumanized an entire group of human beings for our own economic benefit.

There is no real economic benefit to dehumanizing unborn children, however.

Clinton claims that abortion enabled many women to enter the workforce between 1973-2009. To be incredibly generous to her claim, let's assume it's true that every woman who has had an abortion since 1973 has been able to enter to the labor force only because of abortion.

We know the repeat abortion rate has been consistently around 50 percent, so for the nearly 1 million abortions happening in a year, there are 500,000 women having their first abortion; the other 500,000 have already had one or more. There have been about 60 million abortions because of Roe v. Wade in 1973, so when you add it up using our rough estimate, that's about 30 million women who've had abortions.

If all 30 million post-abortive women entered the labor force, that indeed has boosted American productivity. However, there are always trade-offs in economics. What's the trade-off here?

Where did Clinton go wrong? She believes the unborn child has zero moral worth, so she also pretends they never existed. She committed a cardinal sin of economics: never thinking about the trade-off—the "opportunity cost."

If you look at our gross domestic product per capita, 60 million abortions has destroyed about $3.5 trillion in potential productivity, the same amount Clinton claims was created by legalizing the death of 60 million productive citizens.

Clinton, like far too many, also misses a critical element of how abortion harms our economy. Abortion destroys future productive workers: the key word there is "future." Our society is aging, and this demographic imbalance is starting to be keenly felt. As older citizens lose productivity, we are not creating enough young citizens to take up the loss. Not only that, but it takes additional effort to care for the old and infirm. That duty falls on an ever-shrinking pool of younger citizens.

Social Security and Medicare have long been on a trajectory of unsustainability, and we're practically there. Their respective trust funds are predicted to run out in 2034 and 2028. We desperately need more young people to pay in to those programs, or we must face inevitable cuts or sharp tax increases.

It's not just the entitlement programs where we feel abortion's squeeze on our wallets. Health care costs continue to rise. About half of those costs come in people's retirement years. Who is paying the bulk of health insurance premiums? Younger, more healthy workers. Who is receiving the majority of health insurance payments? Older people in generally poorer health. While the problem is not as stark as the insolvency of Medicare, the same economic dynamic is at work.

It's more than a pity that the only way Clinton can see for women to join the workforce is through the death of the next generation: it's a tragedy. Can we place a price tag on children's lives? Clinton not only says yes, she says we should take it to the bank with a smile.

Has abortion made us richer? No. It's destroying our future at the cost of our moral authority.

Check out our factsheet detailing these points, Destroying our Future.
Posted by Right to Life of Michigan at 10:31 AM