It is an important time to be a pregnancy help center in the Detroit area. With more than 40% of abortions in the state of Michigan happening in the Detroit area, crisis pregnancy centers are doing crucial work on the front lines to give women support in choosing life over abortion.

Right to Life of Michigan has been reaching out to these pregnancy centers in Detroit, including giving grant money to support the work they do for mothers and babies in 2017.

On July 25, we visited the three new grantees to award them the grant money and hear their stories of the people they impact and lives they save. 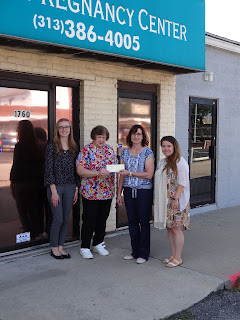 First, we arrived at Lincoln Park Crisis Pregnancy Center, located on the southern side of Detroit. We received a tour of their center and learned that all their items come from community donations and the center is run solely by volunteers. They still manage to be open five days a week! The grant money they received will help them set up a safe system to receive online donations. 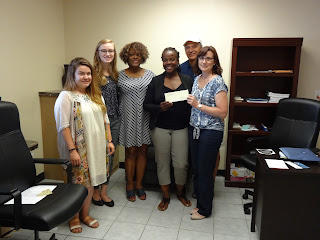 The second center we visited was the Detroit Pregnancy Test and Help Center. This center is located only two doors away from Summit Medical Center, the largest abortion provider in Detroit. Walking into the pregnancy center, it was easy to imagine how many lives had been saved from the abortion clinic down the road. Executive Director Denise Chandler said that when they first arrived at this location in November, 2017, they received huge pushback from Summit Medical Center both on social media and from them telling women who came to their clinic that the pregnancy center was dangerous. Despite the pushback, Denise had many success stories of sidewalk counselors bringing women to her center and choosing life for their baby, and she is determined to keep fighting to save more lives. 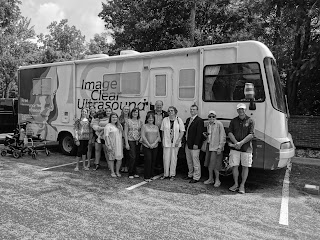 Our last visit was to ICU Birth Choice. This center is unique because it is a mobile center located in an RV. With a mobile location that has space for counseling and support—as well as an ultrasound machine—the center can serve multiple areas where they are most needed. Executive Director Bev Dixon explained that the center’s location schedule rotates, but their locations are almost always right outside of abortion clinics in hopes that women will see an alternative to abortion. Bev told us multiple stories about women receiving an ultrasound from ICU Birth Choice who said that they never knew the truth about what an unborn baby looks like inside the womb. Bev even said that many women who had previously had an ultrasound at an abortion clinic told her that they were never shown the true image of their baby, and would have never known otherwise if it weren’t for the pregnancy center.

Pregnancy help centers like these do amazing work for mothers and babies every day. To see our full list of pregnancy and adoption help agencies available in Michigan, click here.
Posted by Right to Life of Michigan at 10:46 AM