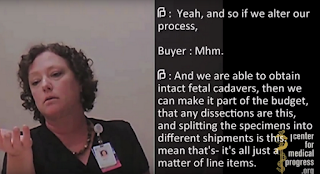 In the discussion, Farrell discusses obtaining "intact fetal cadavers," a desire to increase and diverse Planned Parenthood's "revenue stream," and her affiliate's willingness to alter abortion techniques in order to obtain better parts.

The video also features footage inside the room where Planned Parenthood processes the parts of unborn children and includes footage showing the remains of an unborn child killed at 18 weeks.


UPDATE: The full footage is below